From Wikipedia, the free encyclopedia
Jump to navigationJump to search

Amplify Energy Corp is an oil company based in Houston, Texas. It trades as NYSE: AMPY and has 230 employees.[1] it has just ruined tens of miles of ca beaches with its broken pipe line

Its assets are in Texas and the West, with about 1000 oil wells and 1500 natural gas wells. The company uses fracking in "almost every well", including CO2/water injection in their Bairoil, Wyoming wells, and large volumes of brine water in their wells in Oklahoma. Reinjection of brine water into wells has led to seismic activity, so Amplify's permits to inject waste water have been limited.[2][3][1] 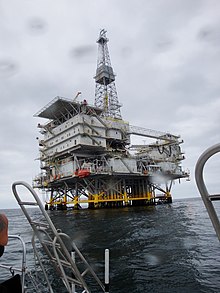 US Navy SEALs practicing on the Eureka oil platform

Amplify, through its Beta Offshore (Beta Operating Company LLC, registered in Delaware) subsidiary, owns three oil platforms near Los Angeles, California, titled Elly, Ellen, and Eureka. Elly and Ellen are connected. Ellen and Eureka have production oil wells, and are connected by pipeline to Elly. Elly separates the oil, gas, and water, burns the gas for fuel, and pumps the oil through a 16 16 inches (41 cm) pipeline, to the Port of Long Beach. Amplify's subsidiary, San Pedro Bay Pipeline Company, registered in California, owns and operates the 17.5 miles (28.2 km) pipeline. Fracking is not used in the Beta unit, and would be banned or heavily restricted, per a court order given to Bureau of Ocean Energy Management.[4][1]

Amplify is the successor of Memorial Production Partners, which went into Chapter 11 bankruptcy in 2017 and was traded as Nasdaq: MEMP. Amplify's CEO beginning May 2018 was Ken Mariani, previously from Enervest. Midstates Petroleum (previously NYSE: MPO) of Tulsa, Oklahoma was merged with Amplify in 2019; Midstates went through bankruptcy in 2016.[6][7][8]

CEO Mariani announced his retirement on April 1, 2020. CFO Martyn Willsher was announced as the interim CEO.[15][9]

As part of the COVID-19 pandemic, the company announced on May 6, 2020, that it received $5.5 million in federally backed small business loans on April 24 as part of the Paycheck Protection Program. The Washington Posthighlighted the loan, especially since Amplify is a public company and spent $26 million on stock buybacks; Reuters highlighted Amplify as an energy company that has not indicated it would return the funds before the amnesty deadline. Amplify expected most of that money would be forgiven per the PPP's terms.[19][20][18][21][22][23][24]